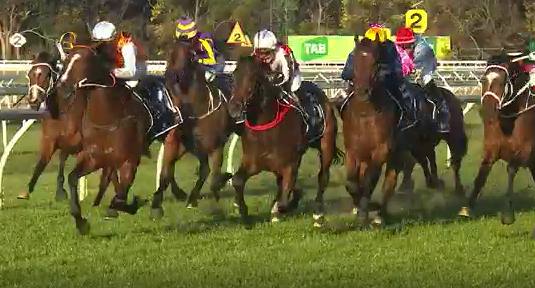 Converge will be resuming in the Group 2 $250,000 Tramway Stakes (1400m) at Royal Randwick on Saturday 3rd September

Converge, among a number of high profile Tulloch Lodge gallopers starting their spring campaigns, is already a dual Group 1 winner and did defeat Godolphin superstar Anamoe in the Randwick Guineas earlier this year.

"What I admire about Converge is that he comes up and performs every preparation, every season,'' Waterhouse.

"He has always been so incredibly straight forward, he's an exciting horse.''

"All seems in good order with Converge,'' Bott said.

"He's first-up and has his main targets a while off so there is good improvement to come.

"But he usually races well fresh although he is better second and third-up from a spell.''

Bott confirmed Converge's main aims this spring are the $1.5 million Epsom Handicap (1600m) at Royal Randwick on October 1 and the $10m Golden Eagle (1500m) at Rosehill Gardens on October 29. 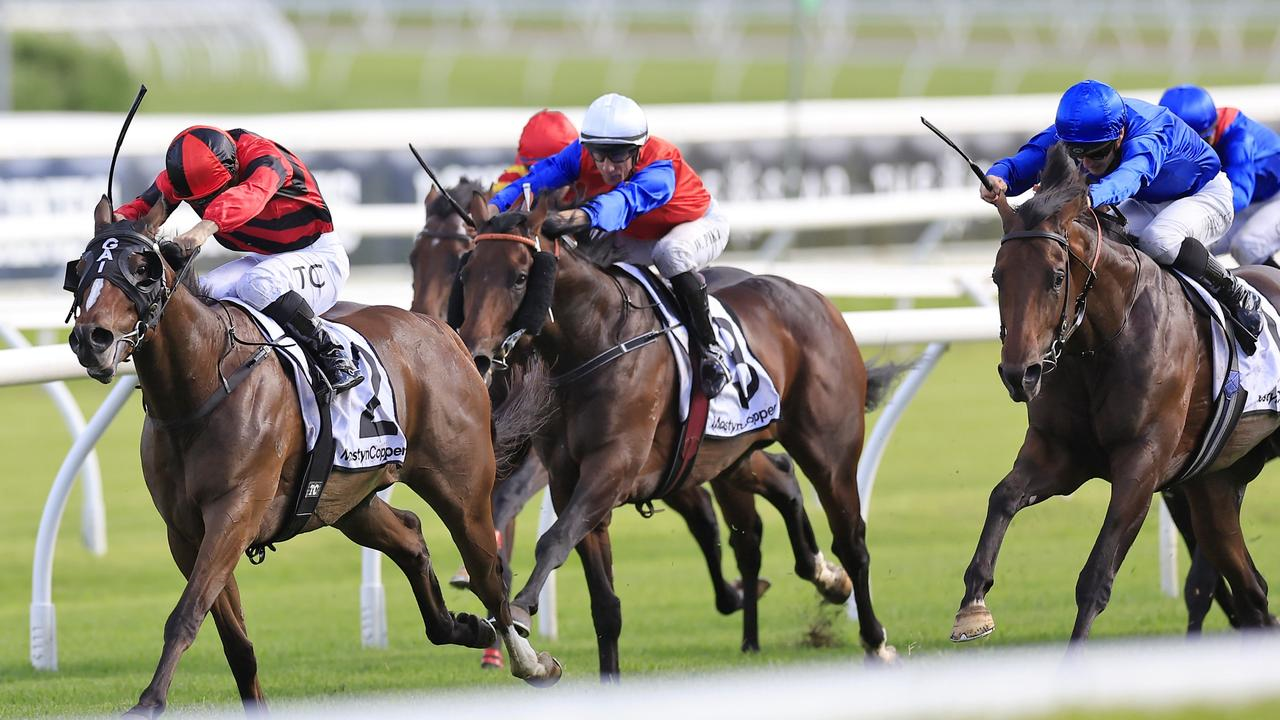 With winter coming to an end, and spring fast approaching, our Farm is starting to light up and we look forward to welcoming our new foals in the coming months. With the dates for sales for next year  announced we look forward to the first 3 to kick off the year. Stonecoat broke his maiden at his first attempt at Scone. This impressive son of Pierro looks to be going places under the guidance of Gai Waterhouse and Adrian Bott.

Stonecoat is a Bay Gelding out of Pierro x Princess Mia

Our final yearlings for the season went under the hammer at Gold Coast in the National Yearling Sale.

Twelve of the fifteen lots that went to sale, met the reserve, with LOT 1569 topping our sale. Matlock was a very convincing winner at Hawkesbury first up winning easily by just under 4 lengths.

Matlock is a Bay Colt out of Kermadec x Legal Consent.

Matlock was offered for Sale in the 2020 Inglis Easter Yearling Sale and after missing reserve we decided to race him ourselves.  This improves his race record to 3:1-0-1

Exempt followed Matlocks win at Ipswich to make it 2 winners in 3 days.

Frankel fever reached the Gold Coast on Friday at the Magic Millions National Weanling Sale, with two colts by the champion Juddmonte stallion selling for a combined A$1.21 million - and both will be retained to race rather than be reoffered for sale as yearlings.

The most expensive of those was the son of 2012 Coolmore Stud Stakes winner Nechita, who was bought by Evergreen Stud’s Tony Bott.

“Whether lightning will strike twice, who knows, but they’ve got another ticket in the lottery. He’s been bought to race unless circumstances change but at this stage he was purchased to race and, with a pedigree like that, if he could win a few races, he’s got some upside as a potential stallion prospect at a later date."

1). Lot 525 A winning daughter of sire of the moment SO YOU THINK. She is Daddy’s girl.

2). Lot 576 A multiple winner that is from the family of LIGHTSABER & FASTNET ROCK.

3). Lot 627 with racing upside and from the family of RAILINGS, EMANCIPATION & VIRAGE DE FORTUNE this flashy mare will turn heads.

4). Lot 628 This talented Gr.3 winner is fast and was early and her pedigree just continues to improve with her 1/2 brother RESIDUE now Stakes Placed with more racing to come.

5). Lot 651 A multiple winner and a last start winner at Hawkesbury last Thursday. A lovely daughter of DEEP FIELD she is Danehill free.

We are Inglis 2022 HTBA May Yearling Sale ready tomorrow don’t miss out on these excellent opportunities!

Lot 31 - a filly out of the multiple winning and city placed mare BESANT and by consistent sire of winners SUPER ONE. She is the half to 6 x winner of over $220k MARITANA for Julienne Welsh Racing.

Lot 67 - a colt by Cox Plate winner and Gr.1 sire ADELAIDE out of the city winning mare DJEL D’AMOUR who is a half to the 11 x winner of over $335k SOUTHERN SHIMMER for Ross Stitt Racing.

Lot 232 - a filly out of a 1/2 sister to SHE SHAO FLY by the same sire as SEE YOU IN HEAVEN for Richard & Chantelle Racing in DIVINE PROFIT. Flying Artie had an interesting winner at Warwick Farm on Monday with talented boy from the bush Democracy Manifest winning his first start for new trainer Chris Waller.

With a win and two seconds for previous trainer Kody Nestor at country tracks, connections elected to give the three year-old his chance in the big smoke and it looks like a good decision.

Democracy Manifesto powered clear to win the 1200m Benchmark 64 event by a length and three-quarters and looks well placed to add to his record now the carnival is over.

Bred by Aaron Bott and Newgate Stallions, Democracy Manifest had been passed-in short of his $25,000 reserve at the Inglis Classic Yearling Sale and then sold the next month on Inglis Digital for $11,000.

Evergreen Stud Farm will consign five lots at the 2022 Inglis Easter Yearling Sale, by sires Pierro, Invader, Snitzel, So You Think and I am Invincible. Copartner Ambition was a Evergreen Stud Graduate and is currently a 4yo Gelding Racing in Hong Kong.

Copartner has had 3 wins and 4 placings in 14 starts, and has amassed over 600K in prisemoney.

Gai Waterhouse finally won one of the few Sydney Group 1 races to elude her – and it came exactly 30 years to the day she trained her first winner.

Converge, under a brilliant Tim Clark ride, held off a surging Anamoe to win a thrilling $1m Randwick Guineas (1600m) at Royal Randwick on Saturday.

It was a special moment in Waterhouse’s celebrated training career as it marked the 30th anniversary of her first starter and winner – Gifted Poet at Hawkesbury on March 5, 1992.

Waterhouse, who co-trains with Adrian Bott, wasn’t at Randwick for the Guineas but cheered Converge from her Southern Highlands property.

Converge is owned and bred by Evergreen Stud Farm Frankel sired his first Group winner of 2022 when his exciting daughter Argentia captured the Kevin Hayes Stakes on a glitzy card at Caulfield featuring plenty of European interest.

Boasting blue-chip breeding, the Australian-bred chestnut had been viewed as a very fine prospect when beating a field including Black Caviar's daughter Invincible Caviar last June but was found to be lame on her only other start, in the Listed Atlantic Jewel Stakes at Moonee Valley in September.

For much of this Group 3 event she was unsighted again but Mark Zahra galvanised her from the rear of the field at the top of the straight to deliver a perfectly timed run to pass the favourite Scorched Earth close home and win by a short head.

Argentia is the product of a small but select group of mares that last year's European, British and Irish champion sire covers on southern hemisphere time.

Her dam, Princess Coup, was a distinguished performer in New Zealand who won prizes including her domestic Oaks and performed at the highest level in Australia.

Although her dam has not been an exceptional producer to date, Argentia made A$670,000 when bought by James Harron on behalf of John Camilleri’s Fairway Thoroughbreds from Evergreen Stud Farm at the Inglis Easter Yearling Sale.

Tony Bott’s boutique Evergreen Stud Farm at Heatherbrae has an excellent record of producing the type of racehorse buyers love. The BTC T.J. Smith-Gr.1 winner Sizzling (Snitzel- Admirelle by General Nediym), who has earnings of $1.3m, was sold off the farm and other graduates include Gr.1 placed, Listed winner Run for Naara (More Than Ready-Kristopher Street (USA) by Kris S), Gr.2 winner Happy Galaxy (Nadeem-Seven Stars by King’s Best (USA)) as well as several Listed winners in the past few.

Evergreen Stud’s yearling manager, Andrew Russell, believes the core reason for these successes is the climate on the farm. “The beauty of this property is that it is basically drought proof, which allows us to feed consistently all year around. This results in consistent growth on our young horses, which of course means they have good solid bones, resulting in long term soundness,” Russell said. “The other key factor is that we have dedicated, experienced staff and because we provide the whole range of bloodstock services, our staff can follow a horse on our property from birth through yearling preparation, breaking in, pre-training and racing agistment.

Then when a client’s horse retires to stud, we continue the cycle with the knowledge and understanding of the horse’s specific needs.” Never Been Kissed is chasing the 'Montefilia double'.

Trainers Gai Waterhouse and Adrian Bott are finalising spring carnival plans for their Group 1-winning three-year-olds with the increasing likelihood Flight Stakes winner Never Been Kissed will back up in the $1 million Spring Champion Stakes (2000m) at Royal Randwick on Saturday. Adrian Bott is daring to dream after pint-sized European-bred juvenile Converge asserted his racetrack authority in the last 2-year-old group 1 race of the season, the 1,400-mete J J Atkins Plate (G1), a race that has a history of unearthing elite 2-year-olds.

The Hong Kong-owned son of (Frankel ), a horse purchased in utero with hopes of becoming a stallion prospect, landed the AU$1 million J J Atkins, which has been won in the past by the likes of The Autumn Sun,  Press Statement, Sizzling , and Darci Brahma .

Converge is the first foal out of the placed European mare Conversely, a daughter of Shamardal  who was purchased by Evergreen Park Stud on behalf of Sui from Coolmore Stud in Ireland when in foal to Frankel carrying the J J Atkins Plate winner.

Conversely, who has a rising 2-year-old colt by Churchill  and a weanling colt by Invader , is one of seven named foals out of U.S. grade 3 winner Melhor Ainda  (Pulpit ).

She is currently in foal to Divine Prophet, but Tony Bott told ANZ Bloodstock News last week that they will look to "mate her up" this year on the back of Converge's success.

Our farm comprises of 500acres fronting the hunter river in the lower Hunter offering lush pastures all year round.